My car is a '93 L AWD, with the only other mod is a snorkus delete. The upgrade from a 90 degree to 45 degree air box for naturally aspirated engines is the best basic mod I've done for the car! When I deleted the snorkus, I felt I had lost a lot of low end torqe, but gained high end. I gained the 45 degree from a '97 outback at my local UPAP, from a N/A outback (the one without a TMIC) and installed it on my car. And what a difference it made! I felt like I had gained all my low end back, plus a little more! And the whole assemble only cost me about $30. Well worth it. I just wanted to post this here, to help any of my N/A friends. If you have any questions just ask. The install is straight forward, just disconnect all the tubes from the intake track, and then the 90 degree air box and mounting braket. Install is the reverse with the 45 degree air box.
- '93 Metallic Blue Legacy L, DD w/lots of mods
- '91 Mazda Miata, Autox fun car
Top

Hmmmm very interesting. I'll have to look into this. Any pictures of exactly which parts you're talking about? (Haven't been under the hood of a 2nd gen in a bit)

It's the whole black tube, along with the black air box. You can use your car's MAF sensor because it bolts right up.
- '93 Metallic Blue Legacy L, DD w/lots of mods
- '91 Mazda Miata, Autox fun car
Top

Here is a pic of the 45 deg intake from my 97 Impreza Outback. I'm guessing it should be the same....but maybe not. Did the one you took have the resonator box by the throttle body? 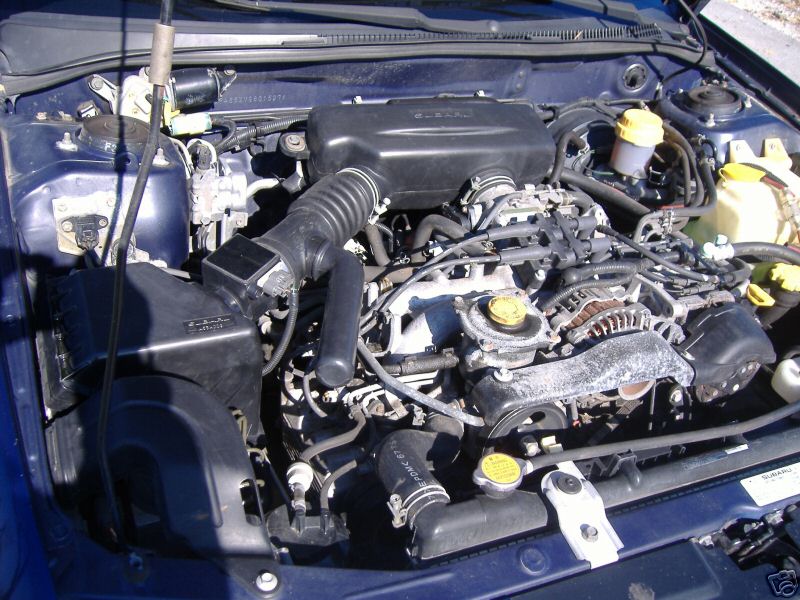 You posted before I could finish typing

Cool, it does not have the resonator box at the TB.
Josh

I was thinking of just doing one with the box on top of the TB, but managed to find one without one; only one that the yard I went to. Josh, would there be anymore power gain in adding one with the box above the TB?
- '93 Metallic Blue Legacy L, DD w/lots of mods
- '91 Mazda Miata, Autox fun car
Top

With the intake setup Josh posted, I felt like I had more torque immediately vs the other style. On my ej22 n/a.

I don't believe you actually "gain" any HP from any style intake whilst N/A, I believe you are unlocking what's already there.
1992 Legacy SS 5mt, build in progress

The diameter of the inlet of the air box is larger in the Legacy as compared to the Impreza. I had compared both side by side some years ago when at a junkyard. Only thing is, I didn't check what year the Impreza was. I'm assuming that the factory "tuned" the diameter to the 1.8L and 2.2L engines. When I saw that, I just grabbed the Legacy intake and left. In hindsight, I should have compared the intake runners (from the MAF to the throttle body) to see if the tubing diameter was any different.

Here's wtdash's pic of the difference in intake diameters: http://bbs.legacycentral.org/viewtopic.php?t=40620

On my '98 wagon, I replaced the factory intake system with the torque (or resonator) box (similar to the one in Josh's pic) with the one that only had the runner directly to the throttle body, like the one in Danteandsoob's pic. It made a world of difference! For my car, there was just a slight decrease in off the line torque but, for me, it was more than made up for in driveability and power from the low mid-range through WOT ranges. Originally, the wagon always felt anemic, sluggish, choked and I disliked driving it. But with the replacement intake, it felt freer-breathing and I could actually enjoy driving the wagon more.

If I get a 2.2 NA with that torque box, replacing it with the intake system without the torque box is one of the first things I will always do!
'94 TW
Top

It's interesting why they put the boxes there. The other thing to note is the intake has a Helmholtz resonator in it as well. This is tuned specifically for the engine/car. The first gen Legacies really did not have these. I'm not sure if it was by design or if something changed with the newer motors that required them, or if Subaru's design and engineering just got better over the years and included these things.
Josh

Interestingly, swapping to the later intake with the big box off the throttle body has greatly improved a couple Subarus I've worked on and driven extensively. I went from the early 45-degree airbox tube to the new style. It felt like mid-top end power was the same, but low end torque and smoothness increased significantly.
2005 Legacy GT Limited Wagon 5-Speed. Stock-ish

That's really interesting, Alphius. Would you please post details and pics, too, if possible?
'94 TW
Top

In my case, the "torque box" really made my '98 Legacy lethargic. My '93 NA Legacy was WAAAAY faster off the line and mid-range. Just touch the gas pedal from a start and my head would snap back. i could chirp the tires if I floored it from a stop.

With my '98, it would've been hard to peel the skin off a ripe banana. Of course, I never tried that but the car felt like it had the power and torque of only two cylinders. Dangerously and disgustingly anemic in pick up. But when I swapped in a 45* inlet from a '95 Legacy, the increase in torque and power from a dead stop through midrange was a night and day difference. So, swapping in a 45* intake system has always been one of the first mods I did to a second-generation Legacy (except for the '99's--the '99 Legacies went to a MAP system instead of the MAF system so it's a totally different breed).

So, since my '98 Legacy should have been the best engineering of the MAF-system cars, in my case, it definitely wasn't. So, I'm wondering which intake parts Alphius used, as over the years, the intakes had variations in parts used.

I have a '95 Legacy wagon right now with the 45* intake. if I can increase the torque in low and midrange by swapping to a torque box system, I'm definitely willing to give it a try so I'm really hoping that Alphius will post what he did and post pics so I can see the parts he used.
'94 TW
Top

The one where I noticed the difference on with a back to back test was on my friend's car. I started with a 95 Legacy LS 4EAT with an EJ22. The EJ22 bit the dust, so we built an EJ22 SB with EJ25 heads to put in, which is a low compression hybrid that already lacks lowend torque. The two intakes I had were: Stock 95 Legacy 45-degree intake tube that we are all familiar with. I also had a 99 Legacy GT EJ25D torque box intake.

I don't have a picture of the EJ22 intake tube, but we all know what it looks like.

Here's the exact EJ25D intake I used. We re-used the 95 MAF and actual airbox, I just used the intake tube from this picture: We need to take a little detour to talk about the 99 cars and MAP vs MAF. First, all 99 EJ25D cars are MAF, no exceptions. Same ECU/electronics setup as every other 97-99 EJ25D. The MY99 EJ22 cars could be either MAP or MAF depending on production date. All were the Phase2 EJ22, but the first cars produced in late 98 were still MAF (I owned one like this) while the later cars at the very end of production in early 99 were MAP. Not really relevant, just wanted to get the correct info out there.

Back to my friend's car. With the original 95 intake tube, power delivery in the low-mid range was very unimpressive. The engine felt like it picked up a lot of oomph over about 4k RPM. I wanted to see if the "torque box" intake would be an improvement because I'd always read it makes a noticeable difference either worse or better depending on who you ask. I drove home, pulled into the garage and put the torque box on. As soon as I pulled out of my driveway, the difference was noticeable. At least in this case with the unusual EJ22/EJ25 hybrid, bottom end torque was greatly improved. The auto transmission is aggressive in keeping the revs under 2.5k in moderate acceleration, and this intake was a hugely noticeable improvement in these conditions. The car struggled much less to gain speed at moderate throttle. With WOT runs, above 4k there was no noticeable difference from the straight intake tube. The car pulled just as hard as it did before. We decided to stick with the torque box after the results of that test.

So, I guess in conclusion, if you have both you should try them both in all driving conditions and see which one you prefer.
2005 Legacy GT Limited Wagon 5-Speed. Stock-ish

I experienced the same thing after swapping as Alphius on my 95 and 96 Legacys. The 95 was a dual port, and the 96 was a single port head setup. I also swapped a '97 single port ej22 into my outback and reused the "torque box" that came with the car.
1992 Legacy SS 5mt, build in progress

Mike, thanks for the verification, too!

Okay, my '99 Legacy wagon w/the 2.2L, is a MAP-based system. It does NOT have the MAF inline right out of the air filter box but has a resonator box before the torque box. On the torque box, there is an electrical connector. I've never researched it but I assume it's the MAP sensor? Anyway, can I plug the hole after removing the connector and sensor and adapt it to my '95 wagon? Going from memory, the torque box looks the same otherwise. (I'm planning on scrapping the '99 soon.)
'94 TW
Top
Post Reply
18 posts • Page 1 of 1