Got something for sale? Need to sell a part? Got some stuff on auction that you want to let us know about?

(Legacy Central BBS is not responsible for any arbitration between its users relative to this forum.
Play nice and deal straight)

Sales of parts and parting cars only. Complete or parted car posts should be made in Car Lot: http://www.bbs.legacycentral.org/viewforum.php?f=32
Post Reply
36 posts

Well, even though I would love to resurrect this SS once you see the pics you will know why, so i've decided it's time to part out to help fund my other builds and give some Legacys a chance at staying on the road for a few more years. The car has 183k on the odometer and i'd still be driving it if it wasn't for massive torque bind draining my gas mileage and the cost of premium to keep it running like it should draining my wallet. Most of the interior pieces were stripped out of the car when I purchased it except for the front bucket seats and dash. Just about everything that's on it is up for grabs except the EJ22T block, front crossmember, and harness at this time. If you are looking for anything specific let me know, make an offer, and we can see about shipping.

I wanted to post this first to legacycentral to give all members a chance at parts before I put it up on Facebook so let me know. Car is located in zip 49855 if you want to estimate shipping costs to you. Would love to see the heads, intake, exhaust be sold together to make an na/T dream come true. I have videos of the car running and driving if needed. 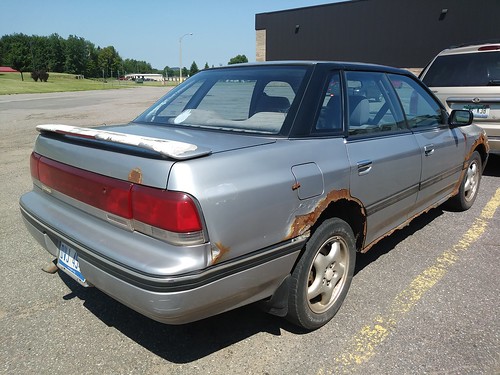 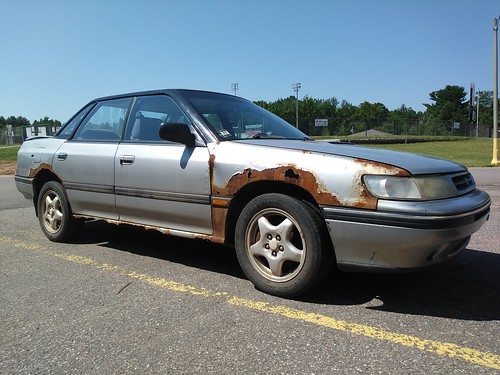 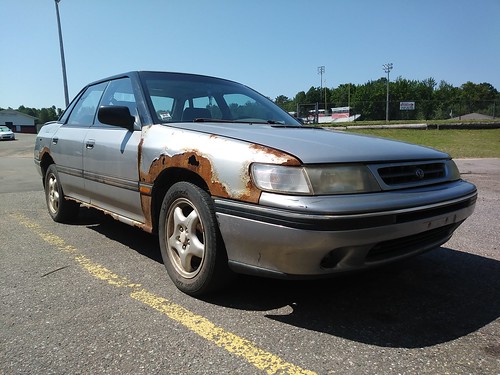 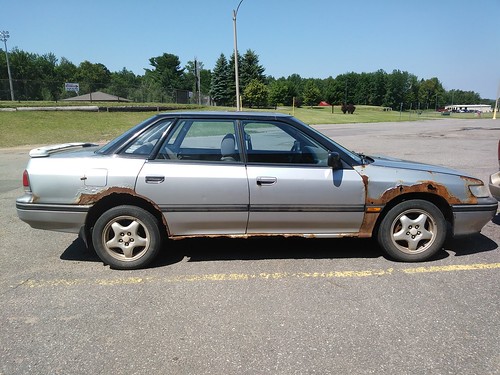 Valance, possibly full trunk, tails, fogs, markers, fog harness and switches? also rear deck if I get the trunk if you still have it. I'll actually be out by detroit in july if you can meet up for it all.
Blue 94GT dead and steadily parting out.
Silver 93 Fwd N/A sedan undergoing repairs
93 Winestone TW project
92 SS scrapped by my landlord...
Top

Someperson - Fogs lights are gone along with the harness, just the rear fog brackets are left. I am pretty much on the opposite side of Michigan from Detroit (8 hour drive) but I do still have times I make it downstate. Contact me closer to when you know you will be around and I can see what's left/what you want.

Front passenger door, is it pretty solid? I'd be interested to buy and pay to ship.
1994 Legacy Sport Sedan
2013 WRX Premium Sedan
Top

I see you are giving up on a 92 SS, partly due to something described as "torque bind"

I have seen the term used before by others, but have been uncertain about the symptoms

When turning the steering wheel all the way to lock, while moving slowly, as in a parking lot, it felt like the inside rear wheel was locking up, and skidding thru the turn.

I have an auto tranny.

I did two trans rebuilds, one at an independent trans shop and one at the dealer.

Both found stuff and I tried to fix everything, from worn a rear housing, to even a changeout of my 4.11 limited slip differential - the dealer service tech said his Suby engineer friend swore was the problem.

There is a service manual diagnostic tree which describes the problem, with several solutions, and a trans computer problem as last resort.

I kept mentioning this to the dealer after hundreds of dollars of attempts, then finally found a spare TCM, and changed it.

I think something can happen to a trans control module so in a sharp turn, maybe the difference in speeds of the rear wheels, that makes it think there is a slip or loss of traction, and it locks the slow side

So none of the mechanical fixes work, cause there's nothing really wrong except with the interpretation of some kind of message by the computer, which does it's job -

I would not have thought there was any info from the mechanical differential to the computer, but the 1st gen Legacy Turbo Automatic Trans computer is very special - It is independent of the Engine computer, whereas that is not the case for the normally aspirated auto trans computer. Don't know if that applies to other model years

You may be on to something there. I have a few extra TCU's from 4EAT's that I have pulled from mid-to-late 90's Legacys and 2.5 Outbacks...might be worth a try even going against the hard and fast rule that Subaru TCU's should stay with the tranny they are pulled from as in year/make/model but even then the body, brake lines, gas lines, and strut towers aren't going to last much longer on this salt belt diamond thus the partout.

I think the torque bind issue has been covered here and on legacycentral.org and your post adds another great solution to this problem and I would love to see the other members chime in as this could be a much needed fix for so many of the early 4EAT's..I just don't want this post highjacked. I would suggest doing another formal writeup with details and add it to the Drivetrain folder. Who knows, it may get "stickied". As for your auto driveshaft, the best advice always points towards replacing with a new OEM unit as they are not reliably serviceable. Pricey but worth it. Good luck with the build and glad to see you chiming back in to the bbs...I remember a lot of your old posts thinking back even to when we were on Yahoo Groups.

P.S. - My dad was just down in SoCal for Pomona Swap Meet and Arizona for Barrett Jackson and commented on all the rain you guys have been getting, more than he can remember in all his trips down...I'm sure its a much needed blessing so enjoy it.

I don't know what stickied and hijacked mean !

I will copy/paste cause I am not able to recall the details, but I'll throw in an extra emphasis that for the BC-BF Turbo Legacy, a BC-BF auto trans computer must (should?) be fitted

I believe those MY91 - MY94 Trans Control Unit part numbers are:

Good to see you are still around.

The turbo Legacy & non-turbo Legacy cars both have completely separate TCU's & ECU's. Can you elaborate in the copy & paste post to the drivetrain forum about the differences you are referring to.

I have a wish for something nobody else in the world wants - The little plastic engine coolant overflow bottle next to the radiator, with the plastic cap still attached to the bottle with a good lanyard !
Larry Witherspoon
ssspoon@aol.com
Torrance (Los Angeles)
92 Turbo Legacy Wagon
310-429-4269
Top

Sure, I have several laying around and can pick the one that's in the best shape. Don't know if it's worth much by the time I add shipping out to you but I will PM you and we can work out the details.

Last call if anyone from the bbs wants parts....gonna post it elsewhere soon and then break whatever is left for my own parts hoard!
1991 Legacy SS 5-Speed

Did you get rid of this yet?

Would you be willing to cut off one of the ECU connectors with some wiring tails still on them?

SublimeJoe will need some.
Josh

Scoobiedoo, I am indeed in need of said connector.
Parts Needed:

PM'd looking for the radio harness
Legacys are like potato chips-you can't stop at one!
Top

Allnines, pm'ed you back on the radio harness. Sublimejoe, you might have some options for that single ecu plug. Search the forums for OTC part no.T96P-12A650-B or do a quick google search. I know these OTC scan tools come up on ebay cheap sometimes and they are a direct replacement for our 1st gen 4-plug ecus as several members, including myself, have used them for patch harnesses. Your other option would be to look for a used ecu with cut harness and plugs still attached. There is also a post here listing where the JECS 4-plug ecu was used outside of Subaru/FHI with spes on year/makes/models that you may be able to reference to find a cheap used replacement ecu w/plugs.
1991 Legacy SS 5-Speed

We started this a while back and never really wrapped it up - I would like to buy your little plastic engine coolant overflow bottle next to the radiator, with the plastic cap still attached to the bottle with a good lanyard ! I think you said you have several laying around but I believe there may be fitment or plumbing issues if not from a BC-BF TURBO car. The parts manual shows the reserve tank assembly complete (including cap) part number for all turbo BC-BF Legacy as 45151 AA040. The tank part number 45151 AA040 is only shown for the turbo vehicles, none of the non turbo vehicles. I do NOT need overnite shipping - snailmail ground is my choice to Torrance (Los Angeles) zip 90504. Am I still in luck ?

I have them, just thought that you would be able to find just the cap new and save some $$$ verses me shipping out the entire unit to you. I did a quick search on ebay, is this the part you are looking to replace????

I am thinking this was a pretty universal part from 90 on up for the overflow tanks but could be wrong. If it's not the part you are looking for, pm me and I can get you a quote on shipping the entire overflow tank out to you. LMK.

Yes that looks like the part. And the auction info even gives it as a fit for 90 up Baja BRZ Forester Impreza WRX STi Legacy Tribeca in one place and 1990-2004 Subaru Legacy along with all the rest in another place and the 92, 93, 94 Turbocharged Legacies as well as the others in a 3rd place

I have kind of a THING for these types of anomalies, so i am just curious enough to spend the $10 to find out whether the manual is correct and some little hairs difference makes it a no fit, or if Subaru technical publishing has fallen down.

So if your OEM bottle is close at hand please let me know if the cap installation looks permanent, or replaceable - if not maybe some careful drilling could work for the ebay cap, but because that kind of "easy" job sometimes ends up making things worse it would be nice to know if i should get yours one way or another, just in case

Thanx for the link

Will definitely check tomorrow on both my 91SS and the 92 parts car, then reference with the example/pic form the ebay link I send you and let you know for sure. I know what you mean about wanting to get these first gens back to looking like they came off the factory floor!