cj91legss wrote:Here is how I have my evap set up. It's still only temporary, I will end up not having the canister in the bay. most likely under the battery somewhere.

So it looks like the connection points to the canister are the same, and that you've just eliminated some additional purge vacuum lines. The diagram points to a purge valve (item 3), do you have a picture of what that looks like? Is that like the aux. purge valve on the first gen turbo legacy?

Also, I notice you call out a check valve. Was that check valve previously there or was it something that Alphius specifically said to included?
Josh

OK, here's how I suggested CJ try his purge system:

First, delete the passive valve and extra hoses that go to the turbo inlet like the v7-v8 JDM EJ207 engines have from the factory. This is how I run since I have the rear-mounted charcoal canister just like a WRX. Works fine for me. The purpose of all the extra junk in the WRX system is to use the partial vacuum in the turbo inlet to vent the charcoal canister under boost, and the purge control solenoid to vent under vacuum. What you're doing by deleting the extra valve and hoses is preventing the engine from ingesting fuel vapor from the canister under boost. The purge control valve will still work as factory and pull fuel vapors from the canister under vacuum. Then, since he has to have his charcoal canister in the engine bay for now, he needs to interrupt the vent line that goes back to the tank and put a canister in line with it.

We're just taking the engine that's set up for the new style system and modifying it's purge lines to insert a charcoal canister back in the engine bay like the old setup.
2005 Legacy GT Limited Wagon 5-Speed. Stock-ish

Yes, the codes can be deleted and you could put a filter on the vent line. Whether you'll smell fuel vapors by doing that is up for debate. Some do, some don't. I've had an open vent line on my Camaro forever and the only fuel smell I get is from the catless exhaust.

Interestingly, I just had to deal with a similar issue on a friend's car that I'm working on. I'm dropping a 99 EJ25D with the new style EVAP system into a 95 Legacy LSi. I interrupted the vent line between the tank and the purge valve and ran it through a charcoal canister. Should work fine. This car did/does have a check valve on the line from the canister to the purge valve from the factory.
Last edited by Alphius on Fri May 22, 2015 4:25 pm, edited 1 time in total.
2005 Legacy GT Limited Wagon 5-Speed. Stock-ish

Yeah, that's more or less how my turbo Legacy was setup. I pulled the canister for the time being. I may have a leak or something going on in the rear of the car that I need to look into.
Josh

Haven't had much time to mess with anything on the car, but I do have a new garage door installed. I'm very happy with that

Got a little creative yesterday with my short ram. Turned it into a cold air using some left over piping I had on my shelf. I think it looks pretty decent.

Eventually I will make something to stop water from getting in there. I may just move my license plate over more.

So I had been dealing with some issues getting the car to move from a stop. Once it was moving, it drove fine. It'd bog down a little when you blip the throttle fast but if you eased into it it'd just do what it's supposed to. I would have to bring the rpms up just to get goin at a red light (of course I waited until it was green to actually move.)

Basically I screwed up.

I had a vacuum leak when I had my friend scale my injectors so I could drive it and at the time I didn't know it. Then I did all the work above on the purge control and charcoal canister and fixed said vacuum leak. This was all after the injectors were scaled.

Buddy hooked up his laptop and looked at some stuff. Since the leak was fixed the car was pulling 16-18% extra fuel.

To add to that, I also extended my intake into the fender liner. I also had a pretty dirty maf sensor, I thought I cleaned it good when it got wet from not having a fender liner, I didn't. I only cleaned the air temp sensor.

I learned a lot in the hour and a half I was at my friend's house yesterday.

Don't change anything without planning to tune....

My drive home was so much smoother. Took the wife for a spin and she even noticed how much better the car ran. Got into boost and "holy fuck."

We're not done tuning the car yet either

Haven't gotten much done lately on my car. Other things come up and need to get handled. I'm still driving it tho. Has 3200 miles on it so that's awesome.

I still have to do a boost leak test because I swear I can hear one...

I drove it down to BNW last weekend. Had a little bit of fun with a bug eye on the way, I was a little bit faster

When I heard that, I got a little excited about my SS

Other than that, nothing else to brag about.

Changed front mount setups on the whip. Everything looks much nicer under the hood now. I have a wiper washer tank again, something I have not had in 4-5 maybe even more years. Also put the evap canister in the driver's fender area in front of the wheel. Didn't take as many pics as I should have, sorry guys.

Needless to say I like how it is coming along after the last few days.

For that blitz blow off valve, I cut the filter off that plastic fitting bolted to it and JB welded a nipple to it to make it recirculate back into the intake. Nice little mod to a 200+ dollar retail bov! I have some more recent goodies to add to this. 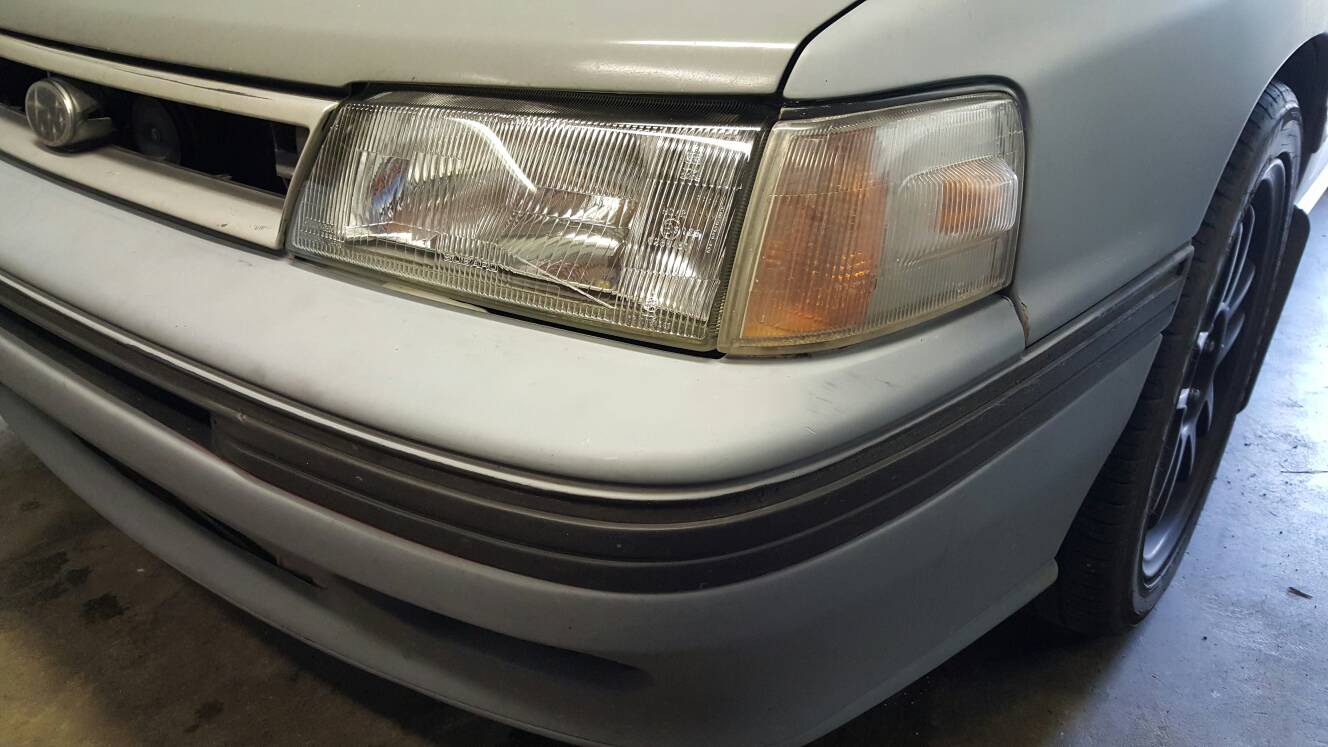 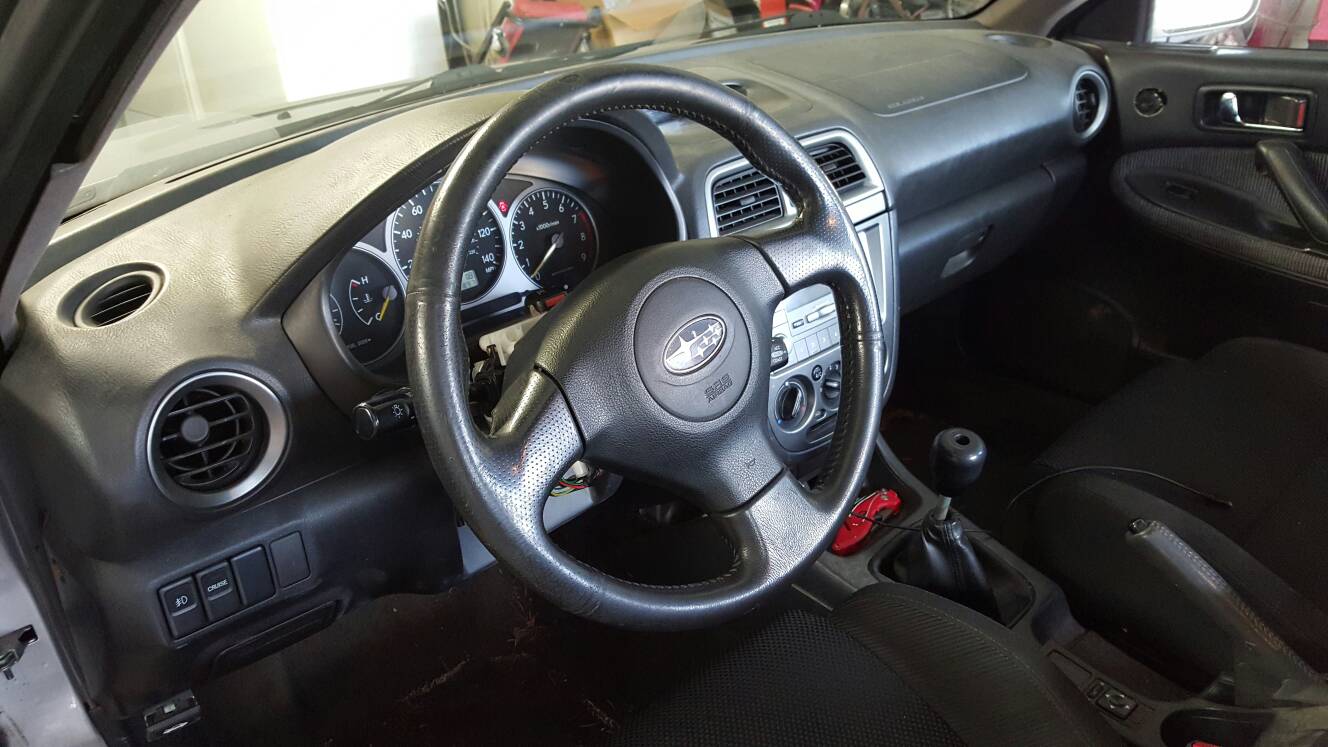 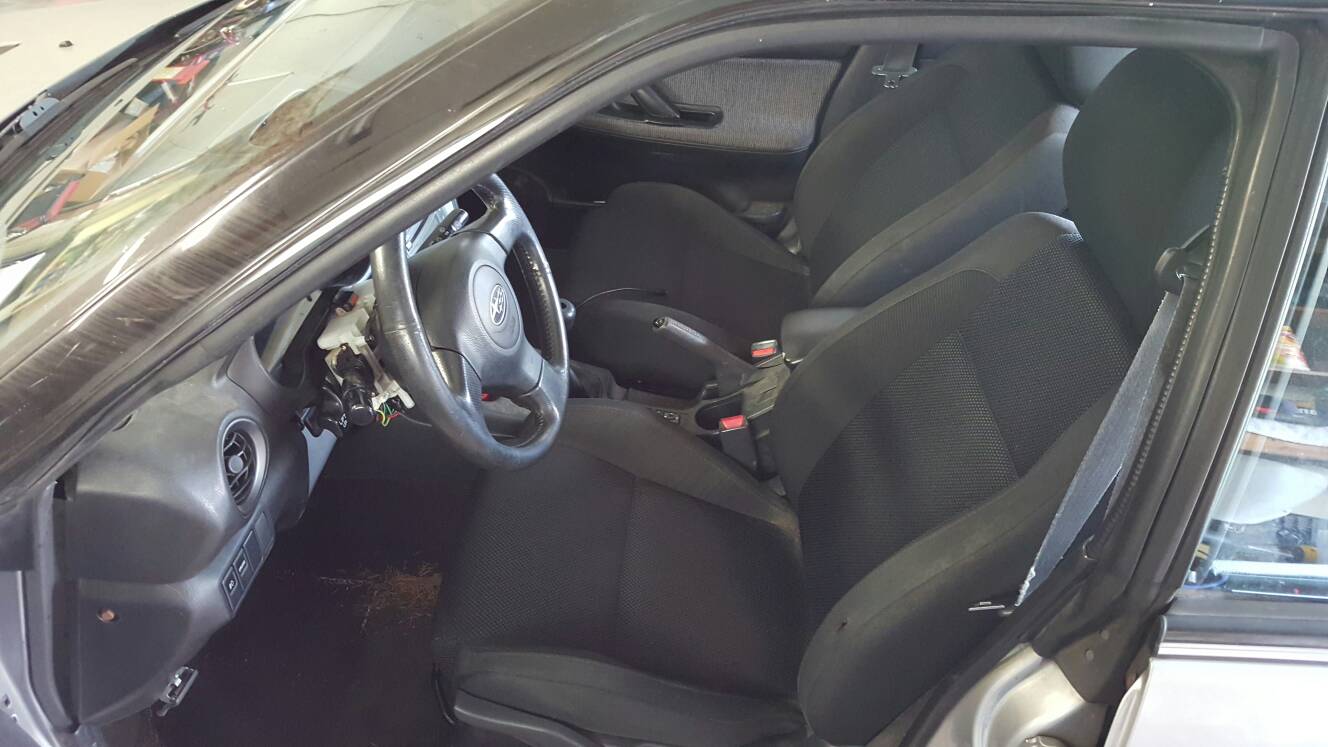 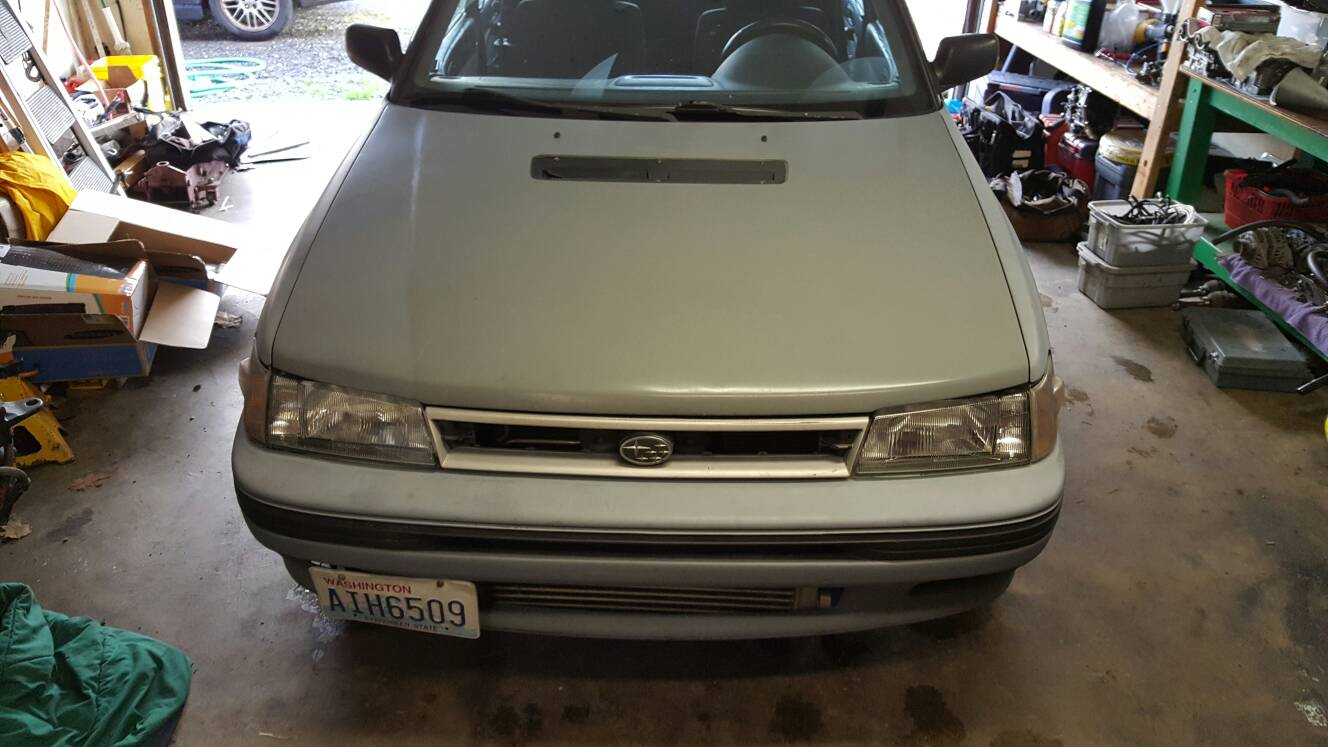 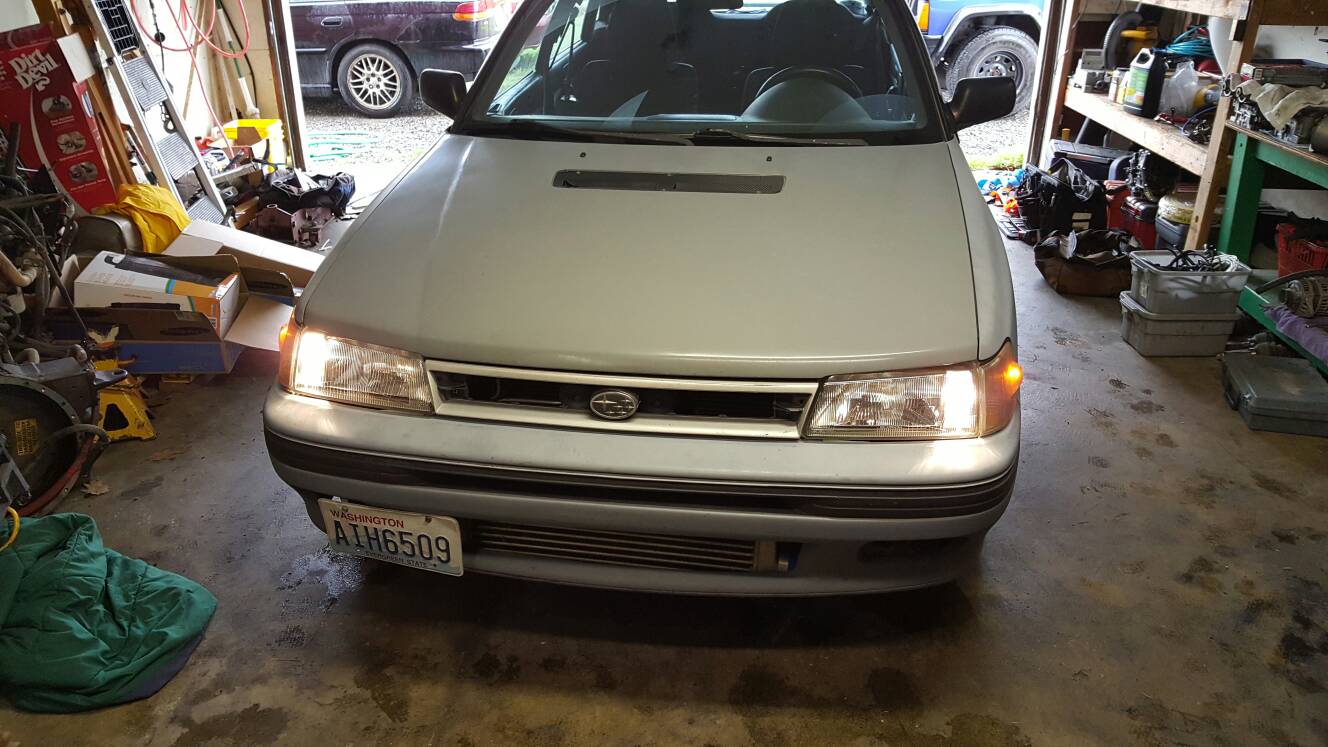 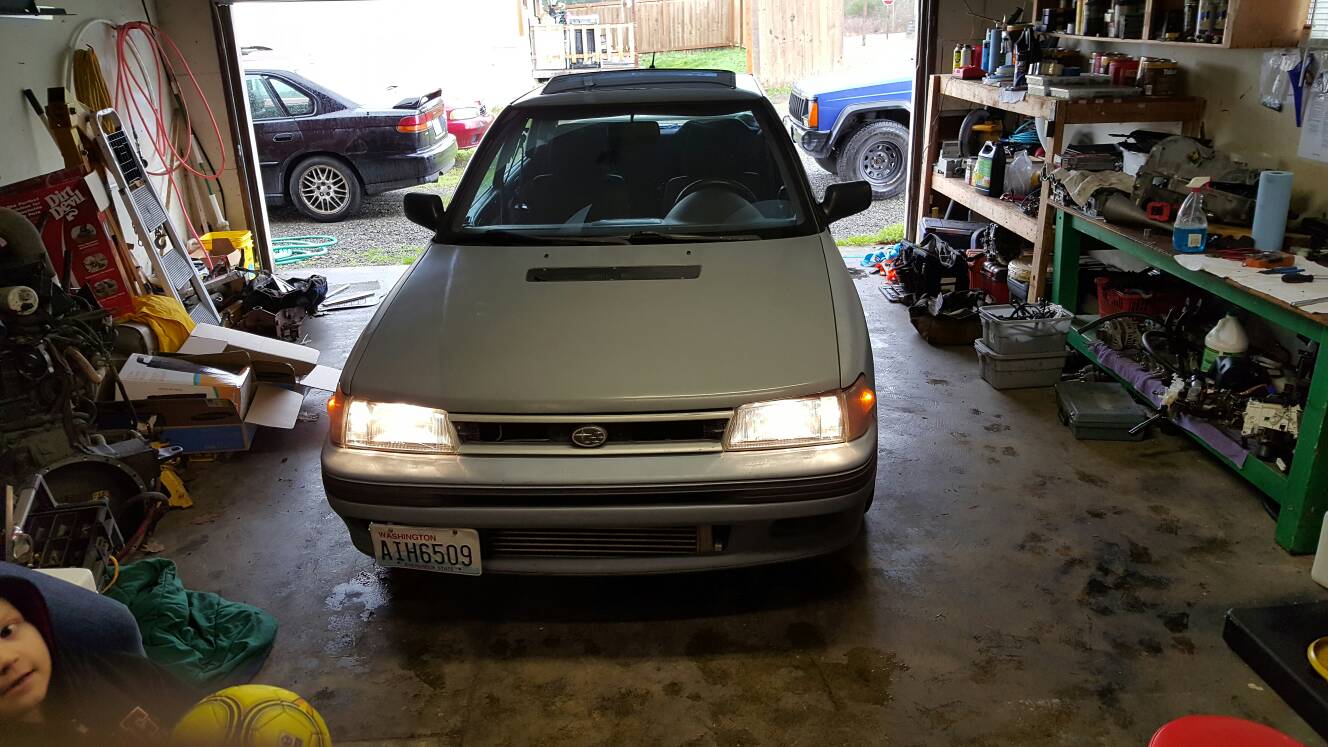 Install time on the lights was about 15-20 minutes. Less than an hour for the seats and maybe 15 minutes for the wheel.

Seats are from a newer impreza, non wrx, but they are definitely nicer that what I had before.

I have other things to add as well but I just don't have the time lately. I have to dig around on here and figure out the electronic leveling and where to put the switch since I don't have the stock dash anymore. The GD center console has the mirror switch in it by the e brake, I think the switch for the headlights would look pretty slick there.

After a bunch of reading, I made the switch to Rotella T6 the oil change before last and I think I'm going to just stick with it. Maybe it's psychological, but I think the engine is a little bit quieter internally.

Other than that, it's got about 8k miles on it, Still haven't finished the tune. It's loud for a daily driver but I've gotten used to to the rumble and my son loves it. Just gotta have the radio louder right?

cj91legss wrote:I have to dig around on here and figure out the electronic leveling and where to put the switch since I don't have the stock dash anymore. The GD center console has the mirror switch in it by the e brake, I think the switch for the headlights would look pretty slick there.


It should be one of these two diagrams.