When I am devoted to tackling this I was going to print those. I came across them a while back when I was searching for the diagrams.

What's more important, when I have time, is to still get my door locks working. That's actually getting very frustrating having to manually unlock all the doors when necessary. There's still that time factor. With the new job and being tired after work every day, I haven't done much unless it was easy. Things change when your "from shop to shop" time is 10-12+ hours pretty often.
91 L-TW Wagon with a full Swap -RIP
92 SS Prefaced, GD dash swapped, 22T/205 Hybrid 20 psi - BEAST!
93 SS Bone Stock Gone!
94 TW Bone Stock Gone!
91 SS 4EAT Sold!
98 LGT 4EAT
98 LGT Wagon 4EAT
Top

I'm wondering if anyone would be willing to take the time to help me get my front doors lock system working.

I think I have some of it worked out in my head. Not too sure tho. 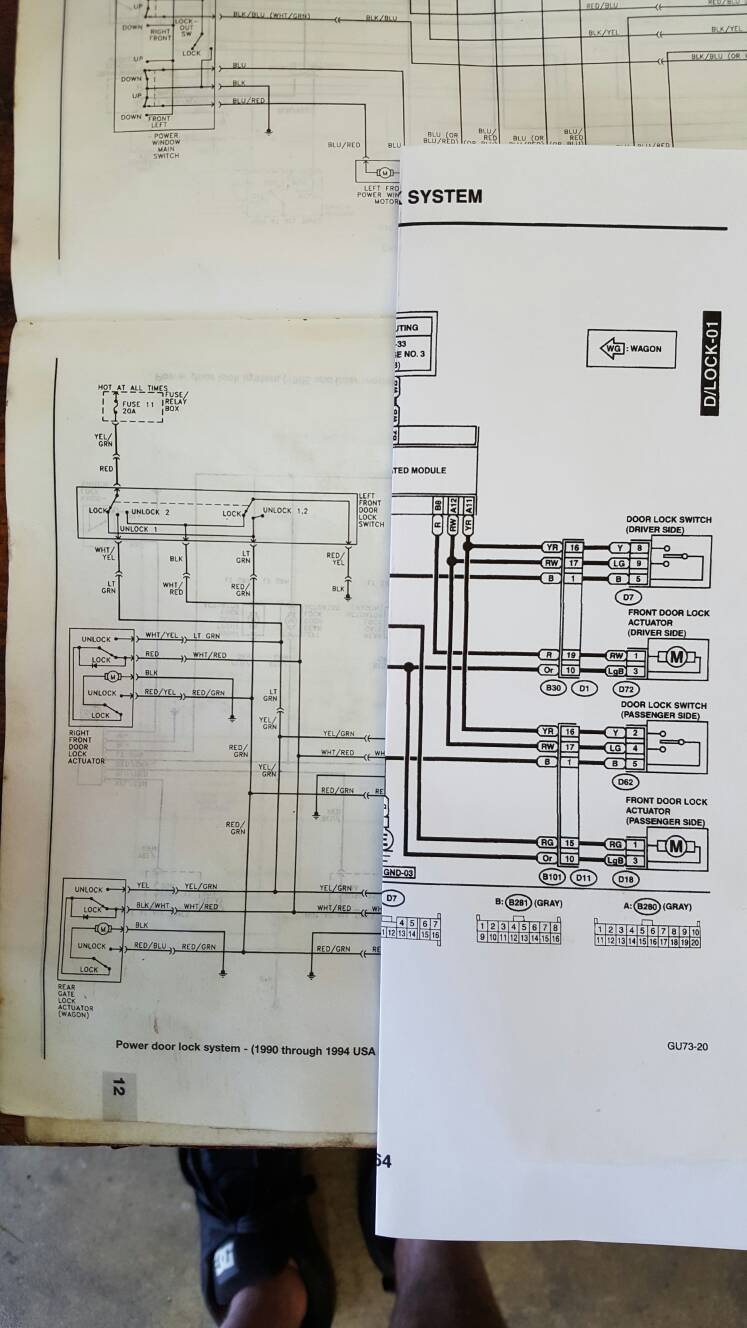 I'd have to look at it more closely, but there does appear to be some differences with the actuators and switches. My time is a bit limited right now, but if you don't make any headway on it, shoot me a PM or email as a reminder and I'll try and dig into the wiring.
Josh

I wold really appreciate that Josh. I haven't had time myself lately either. I will this weekend and plan to try an attempt at it. Mike is coming by with eerie tho so who knows what progress will come of it lol
91 L-TW Wagon with a full Swap -RIP
92 SS Prefaced, GD dash swapped, 22T/205 Hybrid 20 psi - BEAST!
93 SS Bone Stock Gone!
94 TW Bone Stock Gone!
91 SS 4EAT Sold!
98 LGT 4EAT
98 LGT Wagon 4EAT
Top

Yeah, let me know if you guys take a stab at it.
Josh

I have been pretty busy lately chasing down a phantom misfire code. Cyl 4. Recently replaced clutch and flywheel so I'm hoping thats the culprit. Seems that rotational mass changes can freak out the ecu. I.e it's used to the engine rpms decelerating and once you change something that changes that it get's freaked out and CEL. Anyways I'm hoping thats the problem, and I can sleep better. Compression test coming soon as I get up and moving around. Trying to finish my tune before BNW. I may enter it in the car show since I got that fancy dash and all.

Anyways changed my springs out. It's on H&R springs now.

I was planning on going to BNW this year, I'll enter the show if anyone wants to join with me, only $60 to enter. Be cool CJ if u wanna? 2 first gens, hopefully more?
94 Winestone SS 5MT Rob 550 20g. (Pickle)
Original WA car with 460k miles and climbing
Top

Sounds like you may have blowed up a piston.
2005 Legacy GT Limited Wagon 5-Speed. Stock-ish

I had the same thing happen to me with the misfire, but I still had high compression, it was kind of a freak thing because the code just went away by itself. Stupid Cyl.4 lol

I guess I should leave some sort of an update. Some of you probably know already because of the constant bitching I've done about the issue on facebook.

Broken ringland on the #4 piston. It sucks BUT hardly any damage to the cylinder wall SO light hone and go.

I'm going to be experimenting with some 22E pistons. I have a different set of 205 heads now that have ZERO spark plug cracks but had some bent valves, I'm swapping my valve train over and the cool thing is this set of heads even came with solid lifters vs the shim over bucket I had.

So I'm lapping valves, never done it before but what ever, there's a first time for everything. To add to that, I've never done rings or honed a cylinder before either. Yay!

Fortunately I have a bad 22e to practice on!

You can see the old bent valves in the back!

Oh and btw, remember that god damn boost leak I was looking for but could never find? Back seal between the compressor housing and the backing plate.... Asshole turbo nearly made m lose my mind. That's all sealed up now tho.

That sucks.....but it sounds like you're making progress.
Josh

I think we've all been there. Take a break from it and come back when you feel like working on it again.
Josh

Good advice. Forget about it for a while. Your desire to mess with it will return eventually. I'm so burnt out on working on my stupid metro lately. I don't have much choice, unfortunately. I have to drive the stupid thing to work.
98 Metro Hatch Daily Driver :)
91 SS EJ20G Engine/Tranny/Diff Swap Build Thread Here
"Your testes are close to your bottom but you still play with them all the time." Jeremy Clarkson
Top

Well after a while from it I have started pushing myself to get back into this thing. Some of you have already seen pics on FB. I dropped my case halves off yesterday morning for a bore/hone for wiseco 97.5mm pistons. Downside is they say 2 weeks out, they have a bunch of subaru engines from PIA that they have to work on too....

Gonna do some more valve work on this RH head because I can see some spots on the seat that need to go away.

New set of case bolts can be had for 60 bucks so that's the route im going, gonna go with cometic gaskets again, OH AND F***KING TUNE THIS TIME.....

Just grab another motor from Mike, drop it in till yours is back together, he only has like 15 or so in his garage lol
94 Winestone SS 5MT Rob 550 20g. (Pickle)
Original WA car with 460k miles and climbing
Top

You break enough 5-speeds that it sounds like a 6-speed would be worth it...