I'm intending this thread to be a collection of all the various little details associated with swapping a 6spd into a first gen Legacy. It'll also be a good check for me to make sure I'm not missing anything.

I took some dimensions yesterday just to make sure everything appears like it's going to line up. So these dimensions are kind of just an FYI for others in the future.

Distance between trans/engine mating face to the first bolt hole center line of trans mount ~ 21.5 inches.
Note: both the 5spd & 6spd were the same, (hence being able to use the same trans subframe).

Length of the 5mt front driveline from the end of the input shaft to the center driveline flange – 29.5 inches 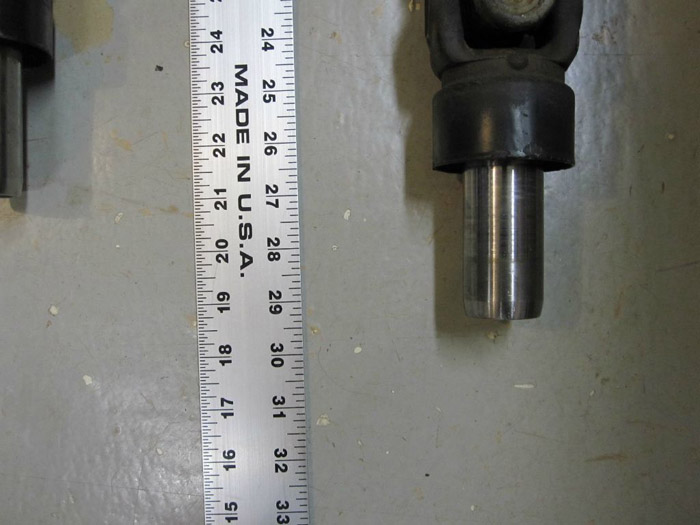 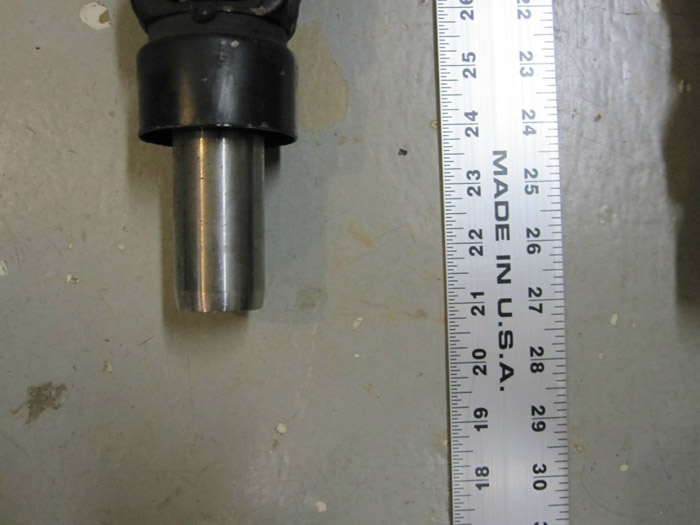 Length of the 5mt rear driveline from flange to flange – 33.5 inches 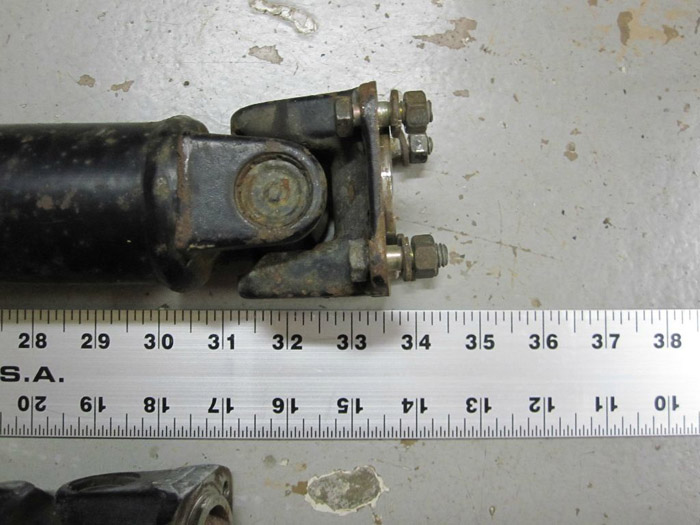 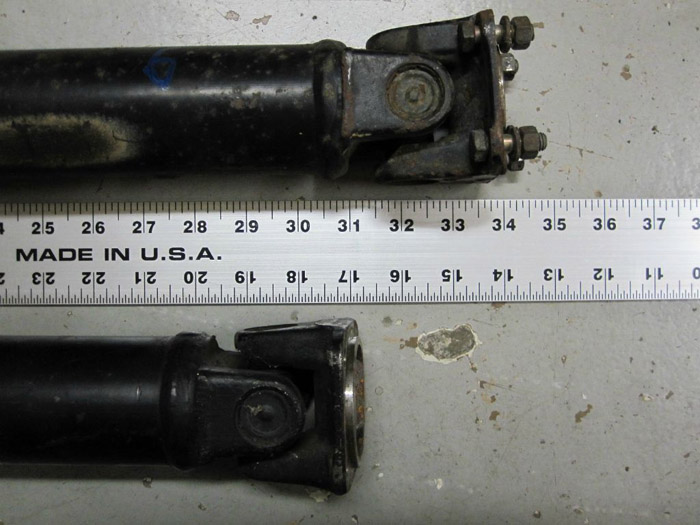 In the comment above and in my pictures I reference the "newer style" auto driveline. This is due to the fact the new rear diffs are a little longer than the ones found in the first gen Legacy, and as such the rear driveline lengths are shorter.

Note: I've updated the numbers above based on my measurements of the transmissions and drivelines outside of the car. Everything looks good and the length differences work out perfect.

This is a list of various parts I have picked up for the 6spd conversion and some notes regarding them.

Lower flywheel cover plate - The plates are different between the 5spd & 6spd, so you'll need to get the 6spd. I'll take some pictures comparing the two, but here's a thread on NASIOC with more info.

Pic of both below (5spd top & 6spd bottom). Note the larger bulge/area for the presssure plate to clear. 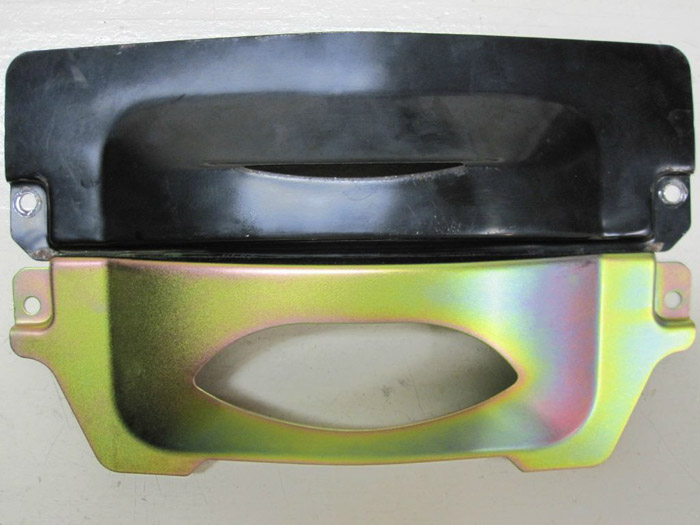 Here's a note and picture regarding the alignment of the flywheel & pressure plate. The dots on them should be aligned 120 deg. or more apart from each other. Those spots are areas of residual unbalance. 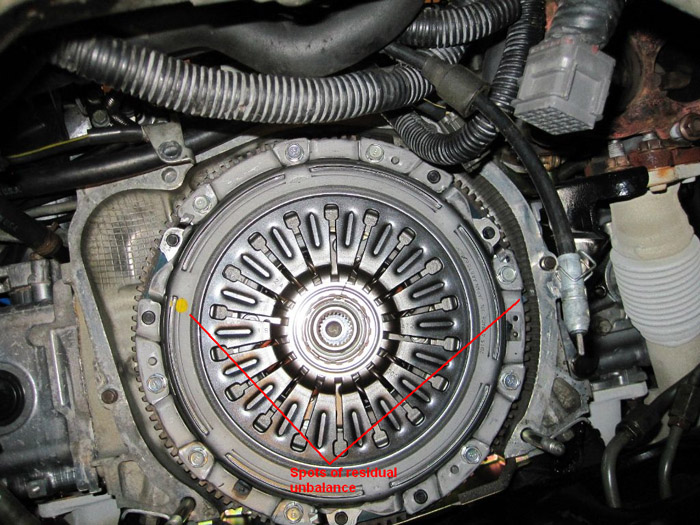 Here is a picture of the 6spd (left) and 5spd (right) clutch release lever for comparison. 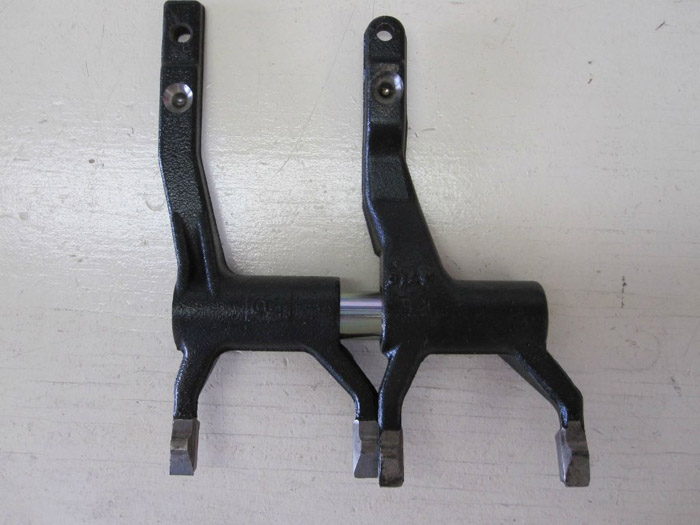 Starter – the 6spd starters are slightly different in depth than the 5spd starters, so you’ll need to pick up a 6spd starter as well.

Front axles – you can run the Legacy front axles by getting axle stubs that were on the early 2004 MY 6spd’s. I’ve listed the seals as well in case you want to replace them as well. To replace the seals, you'll need to remove the bearing caps. More info can be found in this thread.

Trans mount – The 5spd & 6spd trans mounts are different. The 6spd is a little bit shorter in height. If you want the hardened mount, most of what everyone will be selling is the SPT trans mount. Its part # is D1010FE000. It is not the STi trans mount, its part # will start with ST, but from the research I’ve done, they should be the same hardness. This mount is a little different than the 5spd mount. It is not covered with a shiny black coating. It’s more a dull rubber, like the stock mount. Also, the exterior of the mount appears to have a “softer” durometer rubber and the inside is supposed to be stiffer. It’s a little hard to prove all this, but I feel confident in the research I’ve done and people I’ve talked to.

Speed sensor – If you are swapping this into a US first gen Legacy then you’ll likely just unscrew the electrical sensor and install the mechanical one to hook up to the cable. However, if you’re installing the 6spd into another Subaru model with electronic speedometer, you’ll need the plug for the stock sensor (or you could swap your stock trans speed sensor). There appears to be an extension harness you can buy that goes between the speed sensor and chassis harness. The part # for this harness is 81881FA010. This thread on NASIOC has more info. Here are pics of the stock 3-pin speed sensor.

Here are two pictures of the final connector/plug setup. 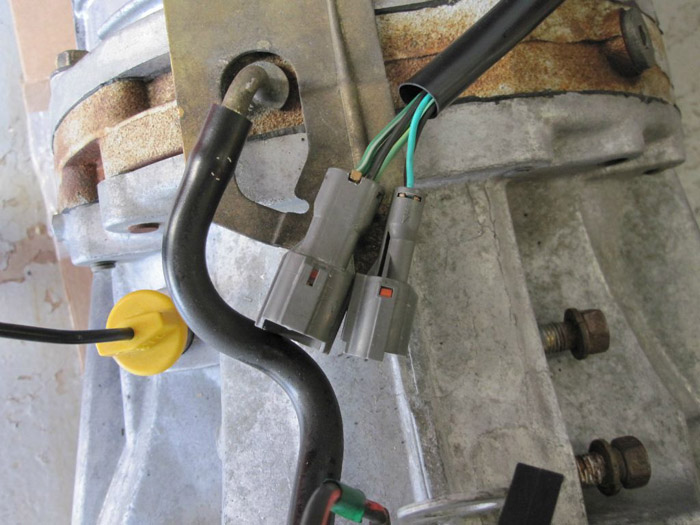 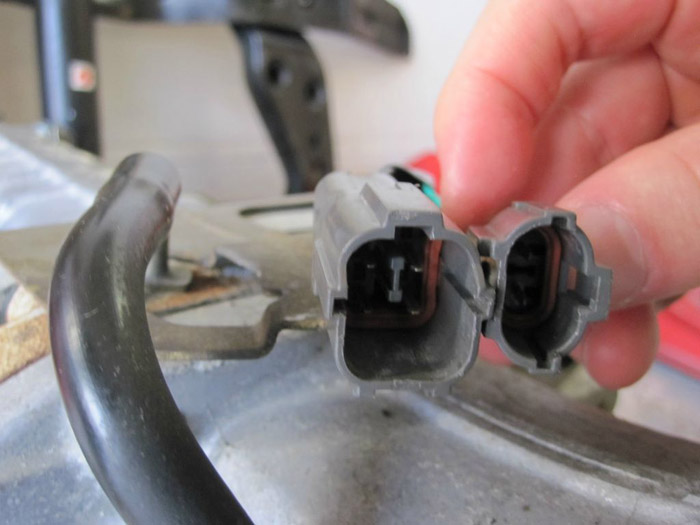 DCCD controller – I’m planning to run the aftermarket DCCD controller from DCCDPro.com. When ordering the controller, make sure to let them know that your TPS voltage is reversed, assuming you are still running the older style throttle positioning sensors.

As a note for installation of the DCCD controller, I found that there was not a great location behind the dash for the controller. In addition, if you install the controller behind the dash the standard length of wires will not be long enough for the G sensor to reach the required installation spot near the e-brake handle. I decided to install the controller under the center console where the automatic seat belt brackets were located. Since I converted to the manual seat belts, these were not be used. I had to modify the brackets to get the controller fit. More details and pictures can be found in my build thread. Another possible location could be under the passenger seat carpet where the ABS computer is normally located. If you don't have the ABS computer, this could be a good spot. If you do have the ABS computer, you still may be able to squeeze it in there.

If you choose to install the controller behind the dash, make sure to request some additional length be added to the G sensor wiring, and the control knob wiring (if you plan to install them in the blank next to the e-brake handle.

Pressure plate – There are three more bolts holding on the 6spd pressure plate, so you'll need to get these as well.

Exhaust hanger - I'm assuming some modification will need to be done, but I'm not sure what will be needed at this time.

Rubber shifter mount - The 6spd mount only has four mounting holes vs. the original Legacy six mounting holes. You will need to mark and cut or punch the extra holes. I used a paper hole punch. It mostly worked. I ended up bending the hole punch so don't use your wife/gf's good hole punch for this.

Here's a picture of the mount with the punched hole. 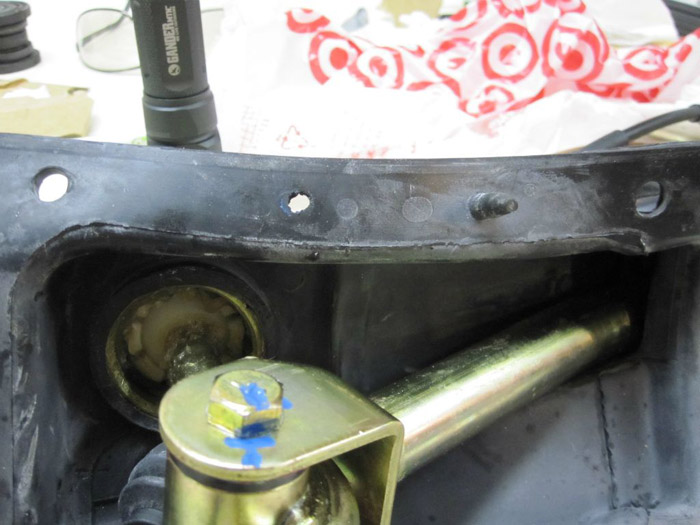 I’ll update the thread as I get to the swap and if others have additional comments to add.
Josh

I thought I'd update this thread with some info on the stock 6spd flywheel, clutch disc, & pressure plate weights. 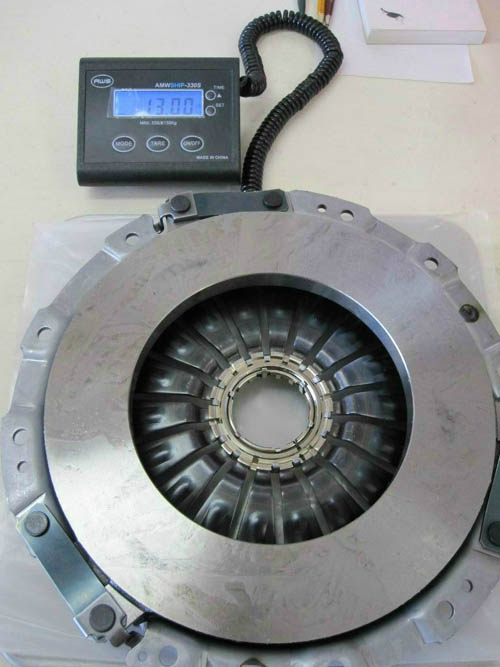 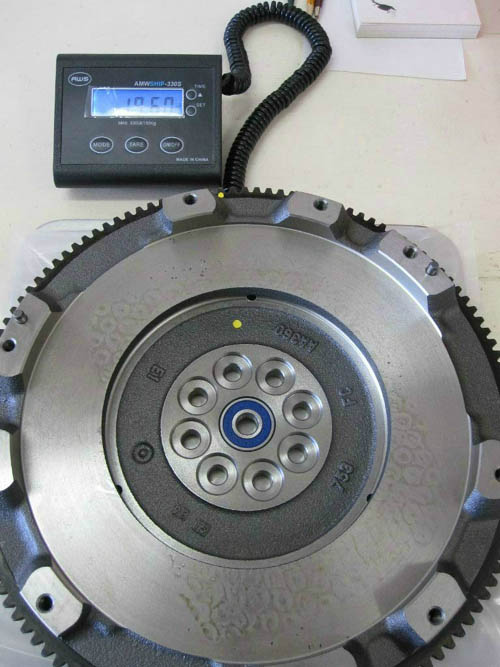 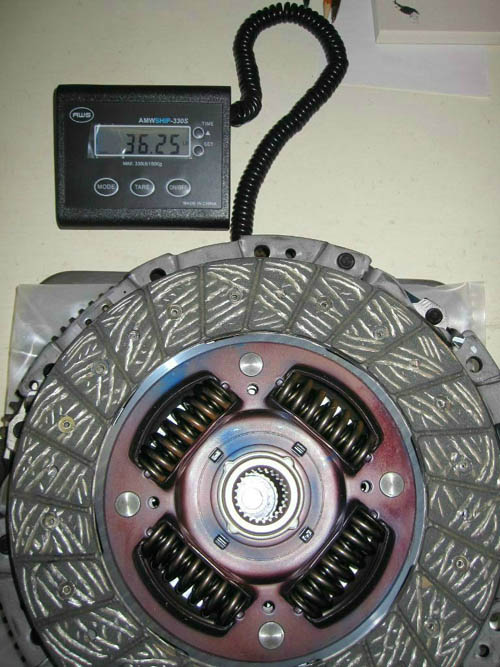 I'm curious to see how that weight compares to the 5-speed stuff.
1992 Legacy SS 5mt, build in progress

what exactly do the teeth do on the flywheel?
Blue 94GT dead and steadily parting out.
Silver 93 Fwd N/A sedan undergoing repairs
93 Winestone TW project
92 SS scrapped by my landlord...
Top

The starter engages them when you turn the key. After you stop turning the key, the teeth in the starter retract, so it's not engaged except when starting.
1992 Legacy SS 5mt, build in progress

never knew where the starter actually engaged to start the engine, either that, or i totally derped and forgot. But I do actually know how the starter works so I guess im not "completely" retarded
Blue 94GT dead and steadily parting out.
Silver 93 Fwd N/A sedan undergoing repairs
93 Winestone TW project
92 SS scrapped by my landlord...
Top

mike-tracy wrote:I'm curious to see how that weight compares to the 5-speed stuff.

Yeah I'll be weighing the 5spd stuff when I take it out. They are WRX components, and while I'm using an Exedy LW flywheel the other stuff is all stock components.
Josh

I found out this past weekend to change the axle stub seals that the bearing end caps have to be removed....which sucks! I need to order new outer o-rings and then will give it a shot removing the end caps and replacing the seals.

Has anyone done this before?
Josh

Are u using the stock shifter? I wanted to find out if the kartboy short shifter for the six speed would work

Yes, my plan is to use the stock shifter.

I don't see why the kartboy short shifter for the six speed wouldn't work. Am I missing something as to why it wouldn't work?
Josh

That brings up another point: is the length of the transmission going to pose a problem in regard to shifter location?


Sent from my iPhone using Tapatalk
2000 Subaru Legacy B4 RSK

Please email me at entirelyturbo@gmail.com if you want to contact me.
Top

Legacy777 wrote:I found out this past weekend to change the axle stub seals that the bearing end caps have to be removed....which sucks! I need to order new outer o-rings and then will give it a shot removing the end caps and replacing the seals.

Has anyone done this before?


Haven't done a 6mt but the 5mt is pretty straight forward. Just put two small punch marks on the end cap and trans case. Count how many turns to take it off and when installing just go backwards. Do one side at a time! I've done probably a dozen of these jobs and have never run into an issue. I've also lost count when spinning the end cap and have not had any issues. When tightening the cap it will start to feel tight when your getting there. Usually the cap will feel like it's bottoming out when your there. Also on the 5mt remember to remove the retainer with the 12mm bolt. I had a real dirty one once and I missed that, it took quite a bit of effort to get it off lol.
We have a special tool for this job. You could make one easy enough. It's a horseshoe with a T handle, on each end of the horseshoe there is a metal bolt sticking out to grab the fins on the end cap. Kind of looks like a cam gear holding tool except smaller.
Top

Thanks for the feedback on the bearing caps! I really appreciate it. Yeah I will probably try and tackle replacing the seals this weekend. I had planned to do the steps you suggested.....I just haven't done one before, so it's always good to know what you're getting into

DerFahrer wrote:That brings up another point: is the length of the transmission going to pose a problem in regard to shifter location?


No, it shouldn't. From my recollection the 6spd shifter stay/arm is shorter, so everything should line up just fine. The nice thing is that it appears Subaru kept all the dimensions for mounting, linkage, etc constant so the transmission could really go into any car. I've got a buddy who has a 6spd in his 98 RS, and I don't believe he had to modify the shifter.
Josh

Did the oil seals and the bearing caps weren't as difficult as I expected. I did a short write-up:

BTW, here are instructions from TiC on installing the 6spd joint poly bushings, just in case anyone needs them in the future.

I've updated the transmission and driveline length numbers as well as a few other details in my original post, so check it out. In addition, I've weighed the 5spd flywheel, clutch, & pressure plate. Check out their weights and comparisons in this thread.
Josh

is that a starrett 48" scale I spy up there?^
Blue 94GT dead and steadily parting out.
Silver 93 Fwd N/A sedan undergoing repairs
93 Winestone TW project
92 SS scrapped by my landlord...
Top

Umm....It's just a shipping scale I bought, I don't remember the name.
Josh

Updated first post with some more info and pictures regarding the differences between the clutch forks & lower flywheel covers, as well as some info regarding the flywheel & pressure plate alignment, wiring, and cutting/punching holes in the rubber shifter mount boot.
Josh